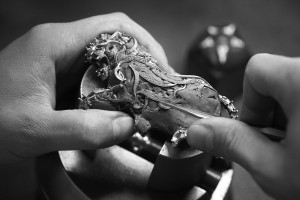 Jewelry is not only one of the most sophisticated arts, but also one of the oldest. Nowadays we consider as jewelry the durable decorative items mostly made from metal, but the scientific information classifies as jewelry even some artefacts made from shells. Those 100,000 year-old beads from Nassarius are knows as the oldest jewelry in the world. The first examples of high-quality gold and copper metallurgy, however, had been dated to 4560-4450 BC and are discovered near Varna, Bulgaria. This collection of more than 600 pieces contains beads, obsidian shells, flints and gold-painted pottery and it’s confirmed to be the oldest knows golden treasure in the world.

The purely functional jewelry from ancient times had evolved into material property importance, while at the present it’s carrying many other meanings: symbol of an ethnic or religious affiliation; protection or luck, provided by amulets and talismans; personal meaning; an artistic decoration for our clothes or body parts or a marker of a social status.

The techniques and the designs also change a lot through the years. The biggest influence is considered to origin from Asia and the Roman Empire, but the modern jewelry offers a huge range of styles and materials which can satisfy every taste. Most common jewelry includes yellow and white gold, silver, platinum, titanium or palladium. The modern technique gives the opportunity of combining the metals in precise proportions, but for the different parts of the world there is a purity level considered as a standard, guaranteed by a small mark.

Whether it’s a cast or a hand-made, the jewelry nowadays had widened the concept of the wearable art. Besides the traditional diamonds and gems, it’s a common practice to combine the precious metals with not so traditional materials such as plastics, rubber, leather, artificial gemstones or glass. The finishes’ surface may be high-polish with shiny look, matte (satin), hammered with a wavy structure or brushed with a texture look.

Back to the top

Error: (#10) This endpoint requires the 'manage_pages' or 'pages_read_engagement' permission or the 'Page Public Content Access' feature. Refer to https://developers.facebook.com/docs/apps/review/login-permissions#manage-pages and https://developers.facebook.com/docs/apps/review/feature#reference-PAGES_ACCESS for details.
Type: OAuthException
Code: 10
Please refer to our Error Message Reference.